5 Ways to Stay Safe on the Roads During Deer Season 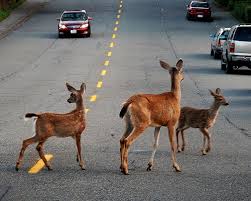 October marks the beginning of deer mating season. From now until early January, increased activity among deer population presents a very real hazard to drivers on the road. Last year in Pennsylvania alone, 3,696 motor vehicle accidents involving deer or other animals were reported, giving the state it’s third-highest ranking in the US for fatalities from such collisions. Fortunately, with a little caution, these accidents can be prevented. Here are some tips to “steer clear of deer” in the coming months:

1) Observe Speed Limits
Being conservative with your vehicle’s speed is not only obeying the law, it also gives you more time to react in the event that deer enter the roadway. Use particular caution approaching curves where animals may not be immediately apparent.

2) Wear a Seat Belt
Typically the most severe injuries involving deer-related crashes result from drivers and/or passengers not wearing a seat belt. Be sure to buckle up and make sure your passengers and pets are secured as well.

3) Be Alert
Scan the road and it’s periphery for signs of animals or movement. Deer are most active during dawn and dusk so be particularly watchful during these hours.

4) Know that Deer Travel Together
If you spot one deer, it is likely others will be nearby as they tend to travel in groups. Slow down and watch for any and all deer that may venture onto the roadway.

5) Use High Beams
It can take about 200 feet to stop when driving at 30mph, so if there is no oncoming traffic, use your high beams at night. They allow you see twice as far as low beams, giving you more time to respond should a deer enter the road.